A total of nine fragments of Roman window glass weighing 88g were recovered from contexts in Trenches 9 and 12. In Trench 9 one fragment was found within buried soil 906, while a second was recovered from fill 908 in pit 909. This latter deposit has been securely dated to the second half of the second century.

Three fragments were recovered from cleaning layers 1212, 1213 and 1218, so are not strongly provenanced. One fragment was found in buried soil 1219, which continued to develop and accumulate until the early third century, and a second in Phase 7 pit 1229 which was backfilled around the middle of the second century. Finally two fragments were recovered from Phase 8 contexts 1242 and 1281; the fill of a pit in the southwest corner of the trench and a gravel pad in the centre of the trench respectively.

All of the fragments were cast glass, meaning that the molten glass had been poured into a shallow mould rather than blown. This type of window glass became increasingly common on military sites from the middle of the 1st century onwards.

The small sample size and scattered spatial distribution precludes meaningful interpretation of this group, however the presence of the material is indicative that at least one building with glazed windows stood at, or near to, the site during the early-mid 2nd century AD.

Thirty nine fragments of Roman vessel glass were recovered from Trenches 1, 4, 8, 9 and 12. The majority were body sherds from thick-walled square-blown storage vessels, though thin sherds of beaker glass were also present. The fragments are quantified in the table below; the date range given is for the pottery assemblage from each context.

The assemblage was dominated by thick-walled storage vessels with blue/green colouration (18 fragments), and thin walled vessels in either blue/green, yellow or colourless glass (16 fragments). Of the latter, most were undiagnostic body sherds. Four fragments of the storage jars/bottles were identifiable as either base (one fragment from the base of a prismatic, mould-blown jar) or shoulder/handle and rim (three fragments, one from a cylindrical jar). A single piece is identifiable as part of the neck and handle of a conical long-necked jug in a yellow/green glass (1266).

Although the fragments were small, two of the cup/beaker sherds from Trench 4 had identifiable decoration, one displaying an indent, another with horizontal facet-cut lines running around the circumference of the vessel (419). 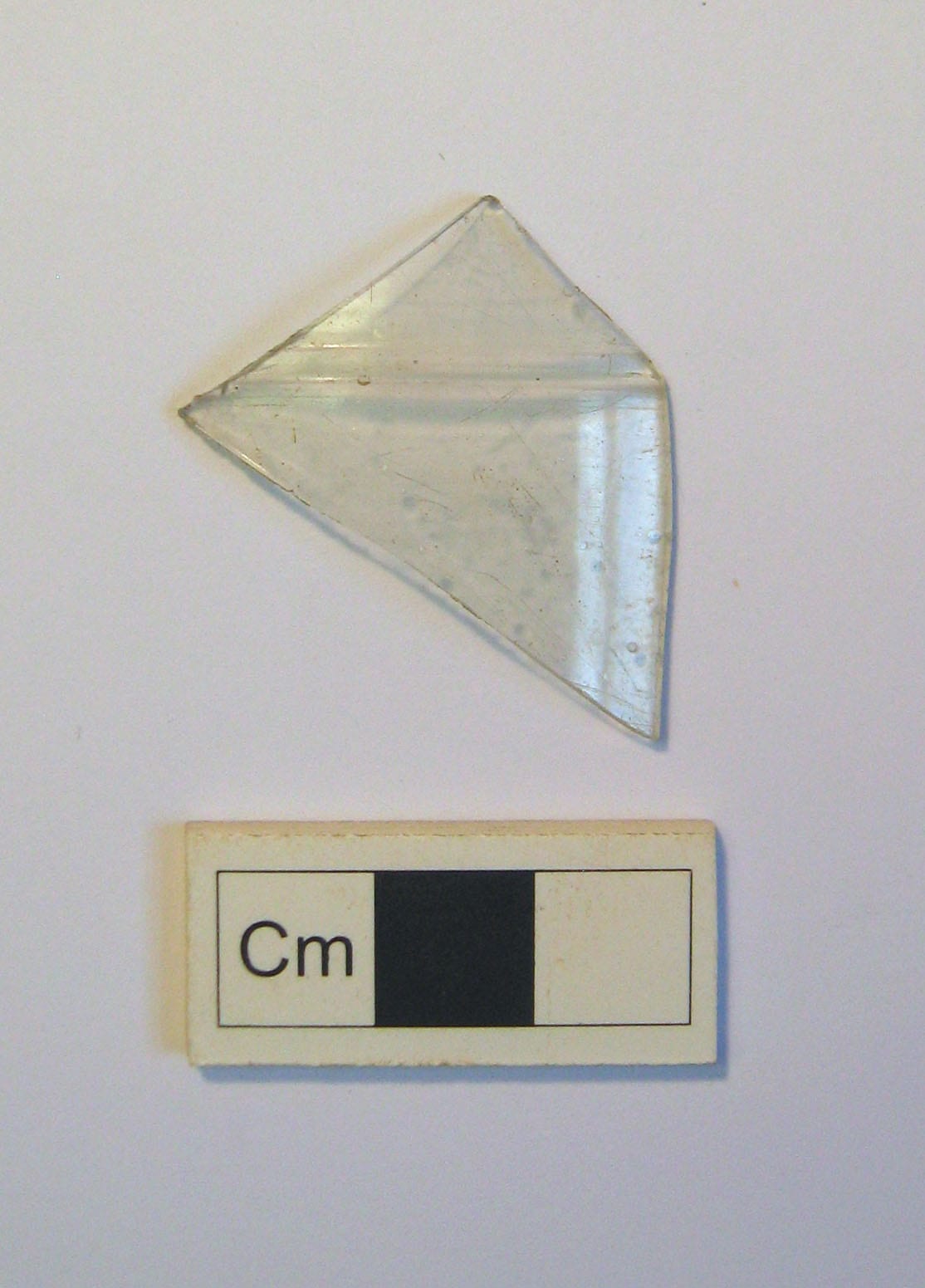 Although not closely datable, the majority of the glass can be ascribed to activity in Phases 7 and 8, broadly falling into the date range 120-200AD. The lack of polychrome glass popular in the first century can be taken as an indicator that there was limited activity prior to the early second century, while the colours present, including blue/green, yellow and colourless, most likely denote a date range in the 2nd – 3rd century.. The material from Trench 8 was residual, while in Trench 12 four fragments were recovered from cleaning layers which are not securely stratified. The largest concentration of glass in Trench 12 (nine fragments) was found in midden deposit 1217, which extends from the late 2nd century through to the 3rd. It is possible that some of the glass found in this layer is residual; pottery from the same deposit is dated between the late 1st and 3rd centuries, suggesting that earlier material was reworked into the layer from elsewhere.

Single sherds from Trenches 1 and 9 do not warrant comment, though the low number of recovered fragments in these trenches is unsurprising, given the small excavated areas. Similarly, the residual material from Trench 8 cannot provide meaningful information.

The majority of the glass (25 fragments out of the total 39) was found in Trench 12. Thirteen of these fragments were not securely stratified, with material recovered from cleaning layers 1202, 1204 and 1212, and midden deposit 1217. Twelve glass fragments were securely stratified, the contexts represented falling into three distinct zones; the backfill of ditch 1221 (fills 1223 and 1216), the backfill of pit 1247 (fills 1210 and 1245) and spreads of gravel and briquetage to the north of clay-floored building 1208 (contexts 1206, 1265, 1266 and 1281). All of these contexts can be equated with the disuse of the building in Trench 12 and an apparent shift in focus of the settlement towards the east in the latter half of the second century.