On the 14th July 2005 the evaluation stage of the programme started. Long, narrow trenches were excavated using a JCB in order to investigate the results of the geophysical surveys and to locate any archaeological remains within Buckley’s Field.

A total of eleven trenches were excavated; this section describes the results of Trenches 2, 3, 7, 8, 10 and 11. The deposit sequence observed in Trenches 1, 4, 9 and 12 are discussed at length in subsequent sections (see ‘The Deposit Sequence’, right). Click below to read more… 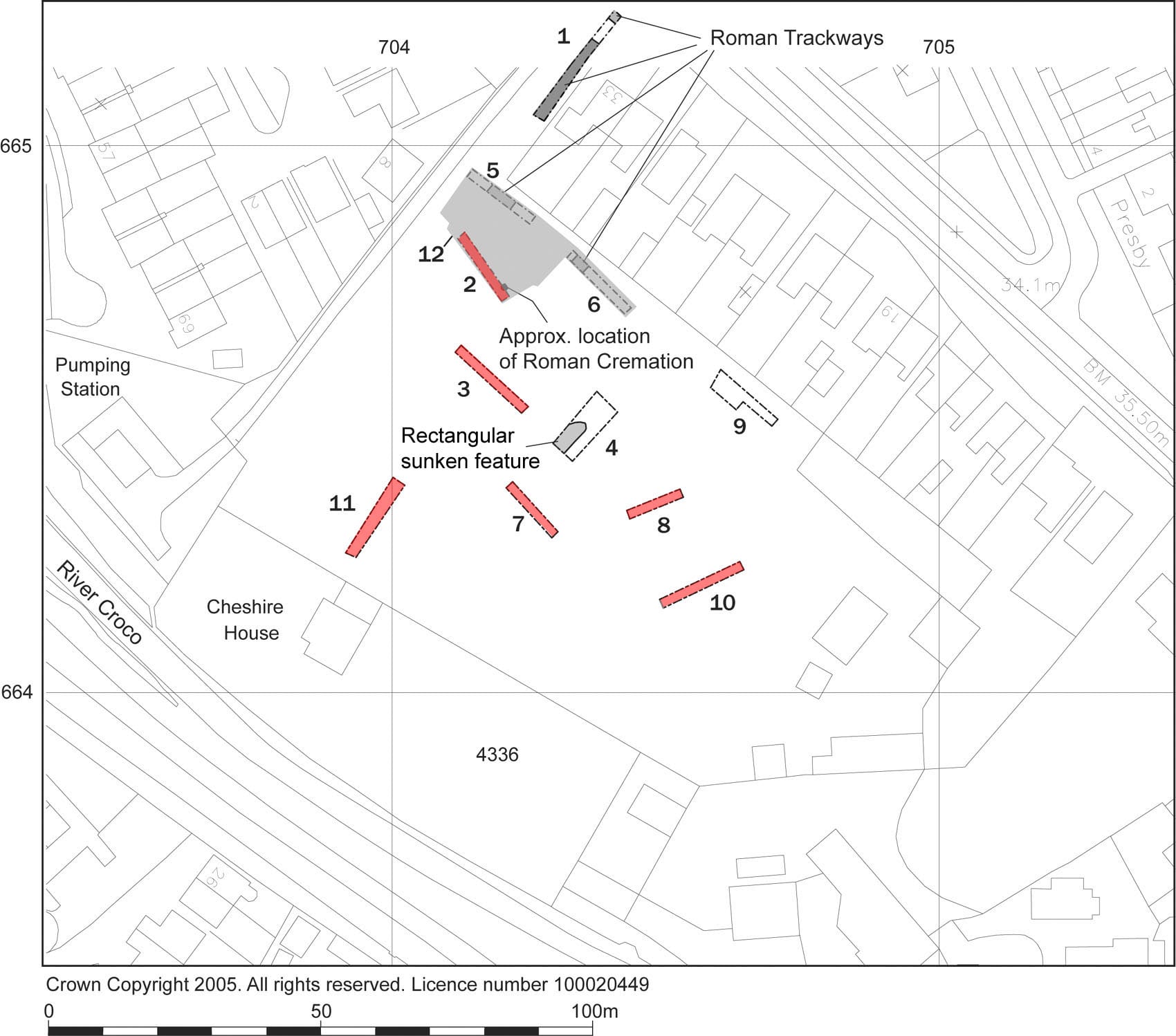 Trench 2 was excavated to investigate a number of positive linear magnetic anomalies identified during the magnetometry survey. The trench was aligned northwest-southeast and measured 10m long x 1.6m wide. Natural sand was encountered at the north-western end of the trench at 32.39m AOD (0.7m below the current ground surface).

The trench was extended a further 2.4m to the southeast during the second phase of machining to determine the extent of the 1970s trench; this was found 0.3m to the south of the former end of Trench 2. Beyond this lay a 2.1m section of intact stratigraphy (Figure 13). Here the natural alluvial sand was encountered at a depth of 32.2m AOD. This was overlain by a thin, grey eluviated (leached) sandy soil (204) up to 0.15m deep, sealed by a thin lens of dark, organic rich material presumed to mark a buried turf line (context 203). Above this was a layer of silty sand (202) 0.25m deep.

Figure 13: Section through deposits in Trench 2

Within layer (202), at a height of 32.47m AOD (0.6m below the current ground surface) a cremation urn of black-burnished ware pottery was encountered containing a significant quantity of burnt bone (context 208; Figure 14). This was seen in the west facing section in the southeast corner of the trench, and was sampled whole for further analysis (Sample No. 1, see the Human Bone section under ‘The Finds’ for analysis of the remains). There was no discernable cut for the cremation in soil (202). 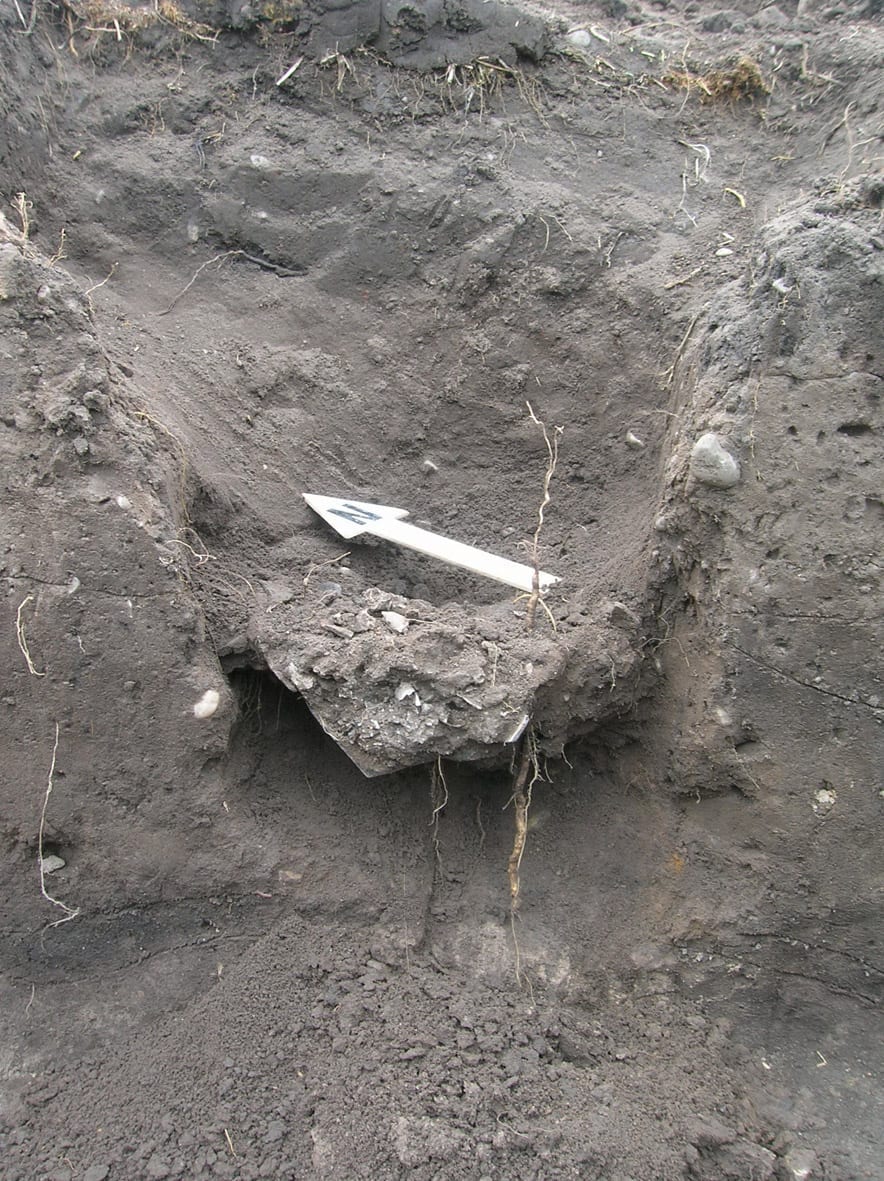 Trench 3 was situated specifically to target a series of linear features seen running northwest-southeast during the magnetometry survey. The trench was 16m long, and was found to be archaeologically sterile. The linear features seen on the geophysical survey were identified as shallow, modern land drains running parallel to one another.

Natural sand was observed in the base of the trench at a depth of around 32.12m AOD, around 0.6m below the existing ground surface. A silty brown subsoil (301=302) overlay the natural, containing frequent small rounded pebbles, flecks of charcoal, and small abraded sherds of Roman pottery. Through metal detection a single piece of lead casting waste was also obtained from this layer. The topsoil (300) overlay (301=302).

Trench 7 was excavated to investigate a linear feature identified on the magnetometer survey. It was located to the southwest of Trench 4, aligned northwest-southeast, and measured 12m x 1.6m.

The natural sand was encountered at a depth of 31.82m AOD, 0.6m below the existing ground surface. The trench contained no archaeology, except a single modern field drain which crossed the north-western corner of the trench. The overburden consisted of approximately 0.4m of mid brown silty sand overlain by 0.1m -0.2m of modern topsoil.

This trench was sited to cross a large north-south aligned linear feature identified during the magnetometry survey. Initial interpretation of the anomaly had suggested that it may be a cut feature associated with Roman King Street.

The trench measured 9.2m x 1.6m and was oriented east-west. The modern topsoil and subsoil (contexts 800 and 801 respectively) were removed onto an earlier, slightly clayey, silty sand (802) which appeared to fill an 8m wide shallow depression in the natural. This soil contained abraded fragments of Roman tile, pottery and one piece of Roman glass, but all artefacts appeared to have been reworked within the soil (e.g. by ploughing) rather than being contained within an undisturbed deposit.

A single modern machine-cut field drain passed through the trench. The cut was 0.87m deep and contained sections of ceramic drain pipe.

Metal detection of the spoil in this trench produced a single Roman copper alloy coin in a fair state of preservation (see the Coins section under ‘The Finds, right), numerous ferrous objects including nails, and a quantity of lead casting waste.

Trench 10 was the most southerly of the evaluation trenches, and was located to target the southern limit of a large north-south aligned linear feature identified by the magnetometry survey. No archaeological features were seen in this trench. Topsoil and subsoil totalling 0.8m in depth were removed onto natural sand, which occurred at a depth of around 32.0m AOD. Two modern field drains were seen cutting through the sand at the western end of the trench.

Metal detection of the spoil heap produced a significant quantity of lead casting waste which may suggest that industrial activity was being carried out in the vicinity.

Trench 11 was excavated running upslope from the south-western boundary of the site to the top of the river terrace to investigate the depositional structure of the slope, and to establish a reason for the lack of magnetometer results in this part of the site.

The trench was 17m long and 1.6m wide, oriented southwest-northeast. In the base of the trench boulder clay was encountered at a depth of 0.4m below the current ground surface at the north-eastern end of the trench, and this sloped gradually down over a distance of around 4m before dropping steeply down to a lower level some 1.5m below the current ground surface. At the south-western end of the trench the clay was overlain with organic silty deposits up to 0.4m thick which may represent river/flood sediments from the River Croco before canalisation. This was overlain by a layer of redeposited clay 0.3m thick which was prevalent across the trench. It is believed that this clay may have been derived from the excavation of the canal.

At the south-western end of the trench the clay deposit was overlain by a 0.5m thick layer of dumped building rubble and land fill of late 19th-20th century date with further lenses of redeposited clay. This became thinner upslope and was not present at the north-eastern end of the trench. The topsoil sealing this layer was up to 0.3m thick.

Because of the depth of this trench and water collecting in its base, the trench was photographed and closed without hand excavation.

The results of the evaluation trenches outlined above answered some of the research questions posed at the outset of the project, and raised other issues which can now be addressed.

In terms of the geophysical surveys that were carried out, these proved to be ineffective techniques for locating features of archaeological origin. The trenching demonstrated that this was attributable to a number of local factors. Along the southwest edge of the Buckley’s Field, an area of magnetic disturbance has been shown to coincide with large dumps of 19th century refuse and rubble along the slope of the river terrace. There was also a high incidence of heavily iron-panned natural sand, which may also have had an impact on the magnetometer results. The area of 19th century dumping appears to have affected the resistivity readings along the ridge of the river terrace also, leading to inconclusive results.

Across the main portion of the site to the east of the river terrace, the depth of the soils (on average around 0.5m-0.8m) may have had an impact on the results of both magnetometer and resistivity surveys, being deeper than the scanning depth of the instruments used during the surveys.

With the exception of modern field drains, residual artefacts found within the soils were Romano-British in date, with no evidence for sub-Roman or medieval activity. The post medieval period was represented by a scatter of artefacts within the topsoil, suggesting manuring of the land with household and some industrial waste.

The evaluation demonstrated a distinct zoning of archaeological activity across the site. Archaeological deposits including linear features, floor surfaces and stone tracks were present along the north-eastern boundary of the site in Trenches 1, 5, 6 and 9 (discussed separately below). These were taken to represent the rear plots of strip buildings which would have fronted onto King Street. Trenches 2 and 4 seemed to represent an area beyond or at the rear limit of the backplots of strip buildings in which archaeological features of possible industrial activity are present, but no boundaries or surfaces are associated with these. Trenches 3, 7, 8, 10 and 11 were located closer still to the river terrace and were archaeologically sterile, indicating that the land was probably marginal and unsuitable for unoccupation. Notably, the notion that Roman King Street possibly crossed Buckley’s Field has been disproved; none of the trenches contained evidence for this feature.

The location of the cremation in Trench 2 is interesting; the Black Burnished Ware jar in which the cremation was found has been dated to 240+AD, post-dating the occupation of a building found to the east in Trench 12. The building (and the plot that it occupied) was being used as a rubbish tip by the mid-3rd century. It therefore seems probable that the position of the cremation marks the western extent of the settlement along King Street.

Perhaps the most striking feature noted in all of the evaluation trenches was the presence of a uniform grey soil up to 0.5m thick which covers Buckley’s Field. This soil represents processes occurring from the late Roman period onwards: it is clear that over time the interplay of soil-formation processes has removed traces of more ephemeral archaeological features, and any indication of the source material from which the soil had originally formed. This type of deep, featureless soil is typical of sites in the area.